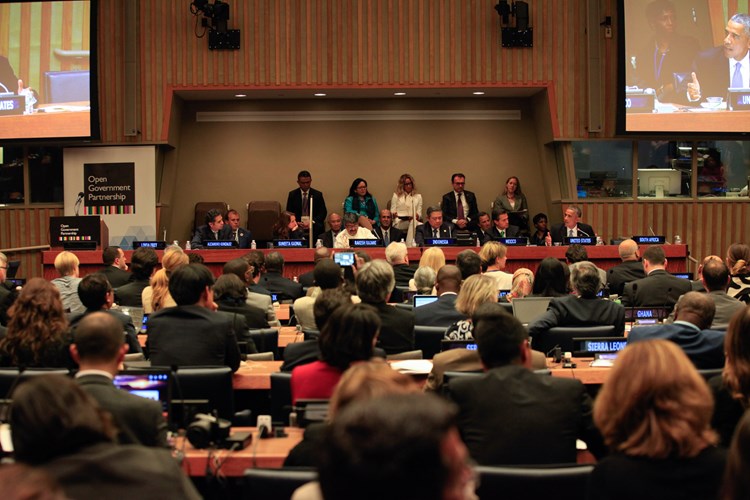 Open Government Partnership
Open Government Partnership is a multilateral initiative that aims to ensure specific improvement in transparency and openness of public administration bodies, engagement and empowerment of citizens and civil society, fight against corruption and use of new technologies for the improvement of service quality provided to the citizens by the public administration. The Initiative is overseen by the Steering Committee whose members include representatives of governments and civil society organizations. The Republic of Croatia has been its member since 2014, and it has been represented by Mr. Joško Klisović, Deputy Minister at the Ministry of Foreign and European Affairs.

The author of this Initiative is the President of the United States, Mr. Barrack Obama, who announced its basic principles in his speech at the UN General Assembly in September 2010, which mainly rely on the Open Government Directive, one of the frames of its program.

The Open Government Partnership Initiative (OGP) was presented for the first time in Washington on July 12th 2011 during the international summit. The summit was held in the State Department, hosted by State Secretary Mrs. Hillary Clinton and the Brazilian Minister of Foreign Affairs Mr. Antonio Patriota. The representatives of state bodies and civil society organizations from more than sixty countries, including Croatia, participated at this summit.

The OGP was formally launched on September 20, 2011 at the UN General Assembly in New York, when the eight member countries of the Steering Committee (Brazil, Mexico, the Philippines, Indonesia, South Africa, Norway, the United States and the United Kingdom) endorsed the Open Government Declaration, and announced their country action plans.

To become a member of OGP, participating countries must endorse a high-level Open Government Declaration, deliver a country action plan developed with public consultation, and commit to independent reporting on their progress going forward. Currently there are 79 participating countries, including the Republic of Croatia.

BASIC PRINCIPLES OF THE INITIATIVE
The information on the government activities and decisions are open, substantial, timely, freely accessed by the public, as well as complying with the basic standards. Governments try to mobilize the citizens to get involved in public debates and give their contribution, thus leading to more responsive, innovative and efficient governance. Certain rules, regulations and mechanisms have been set in order to invoke the government actors to justify their actions, work to the criticism or requests addressed to them, and accept responsibility for failures occurred in the performance of their duties in view of the existing laws or commitments undertaken. Governments acknowledge the importance of ensuring a free access for citizens to technologies, as well as the role of new technologies in encouraging innovations and the importance of enhancing citizens’ capacities for the use of technologies.

The commitments undertaken by the participating countries are structured around five big challenges that public governing bodies face in each country. In their first participating year the countries are expected to choose at least one of these challenges and develop specific measures and actions on the national, local /sub-national level, i.e. on the level for which they predict will be mostly affected. The following five challenges are included:
• Improvement of public service provision
- improving a wide range of services provided to the citizens, including health care, education, social care, water supply, electricity delivery, telecommunications, as well as other relevant public services, via strengthening public administration work and innovations in the private sector;
• Increasing the public service integrity
- fight against corruption in public service performance, access to information, reform of the financing system of election campaign, freedom of media and civil society;
• More efficient management of public resources
- budget, public procurement, natural resources and foreign aid;
• Creating safer communities
- Public order and safety services, efficient answer to crisis, catastrophes and ecological disasters;
• Strengthening responsibility of companies
- responsibility of companies for issues such as environment, fight against corruption, consumer protection and involvement in problem-solving in a local community.

Countries which want to participate in the Initiative must show their commitment to the open government principles by accepting minimal criteria in four key areas measured with objective indicators and evaluated by independent experts:
• Fiscal Transparency
The timely publication of essential budget documents forms the basic building blocks of budget accountability and an open and transparent budget system.
• Access to Information
An Access to Information Law that guarantees the public’s right to information and access to government data, which is a prerequisite for progress toward practice of open government.
• Public Officials Asset Disclosure
Rules that require public disclosure of income and assets for elected and senior public officials are essential to anti-corruption and open, accountable government.
• Citizen Engagement
Open Government requires openness to the participation of citizens and civil society and their engagement in policymaking and governance, including protection of civil liberties.


Steps toward active engagement of the Initiative’s potential participating countries

The procedure for including new countries in the Initiative is conducted in seven steps:

1. Meet the minimum requirements (in the four determined key areas) and show readiness to accept the OGP five common challenges.

2. Inform the Steering Committee on the intention of participating by sending a letter that will be published on the website of the Initiative.

3. Organize a wide public discussion in order for the country to inform about its commitments in the Initiative and establish a forum with a number of stakeholders who will provide a regular consultation on the implementation of the commitments.

4. Make a national annual action plan with the specific measures and activities, and referring to at least one of the five key challenges. If necessary, an expertise that will be available within the Initiative networking mechanism can be used.

5. Participate in the consultation on the draft of an action plan with the Steering Committee and other member countries of the Initiative.

6. Confirm publicly the acceptance of the Open Government Declaration and publish the final national action plan on the website of the Initiative.


Open Government Partnership- the central website of the Initiative

Countries participating in the OGP Initiative